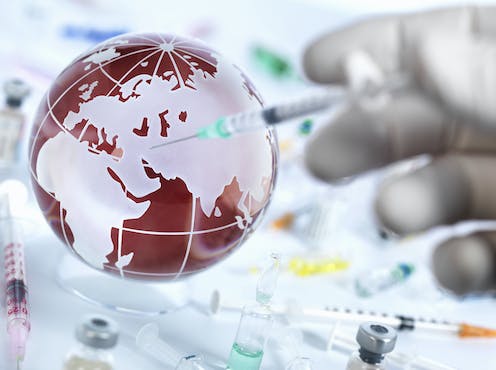 There is a global effort to distribute vaccines to poorer countries, but some of the world’s largest countries, including the U.S.,Russia and China, do not intend to support the effort.

That lack of backing could have devastating consequences for accessing a COVID-19 vaccine in the U.S. and many poor countries around the world. That is because the U.S. will not have access to vaccines secured by the initiative, called COVAX. Also, COVAX may lack the funding it needs to help poor countries control their epidemics, enabling the virus to continue to circle the globe.

I am an ethicist at Binghamton University and am interested in COVAX because I work on global health and justice.

What is the COVID-19 Vaccines Global Access (COVAX) Facility?

COVAX, formally known as The COVID-19 Vaccines Global Access Facility, is a global collaboration for speeding up the development, manufacture and equitable distribution of new vaccines. Countries that sign on to COVAX will get access to a broad portfolio of new vaccine candidates to combat the SARS-CoV-2 virus that causes COVID-19.

COVAX is co-led by Gavi, the Vaccine Alliance, the Coalition for Epidemic Preparedness Innovations and the World Health Organization, or WHO. Gavi, a public-private partnership, vaccinates children against deadly diseases around the world; CEPI helps develop vaccines and the WHO works with 194 member states to promote global health. Together these groups have raised US$700 million toward an initial target of $2 billion to support the COVAX facility.

COVAX supports research and development of new vaccines by investing in them and negotiating prices with pharmaceutical companies. The goal of COVAX is to have 2 billion doses to distribute by the end of 2021, which should be enough to help countries vaccinate 20% of their populations and end the acute phase of the pandemic.

Participation in COVAX can be seen as an insurance plan even for the richest countries, like the U.S., that have bilateral agreements with a few drug developers to get priority access to some vaccines. If those COVID-19 vaccine candidates fail – a recent review of drugs and vaccines that go through clinical trials showed even those in the final stages of research have only a 20% chance of success – countries committed to COVAX can access other vaccines that should help them protect their most vulnerable.

How does the COVAX plan work?

The COVAX Facility pools participants’ buying power by getting vaccine manufacturers to produce the vaccines at scale and make risky early investments in manufacturing capacity. The idea is that by pooling these resources, COVAX will ensure rapid access to new vaccines as they are developed. Gavi is also helping some poor countries get ready to distribute vaccines outside of the facility.

What does it mean for the U.S. to pull out of COVAX?

The pandemic has already wreaked devastation, causing more than a million deaths and disrupting billions of lives. If countries can get good vaccines, they can save many lives and, some estimate, save $375 billion in global economic activity every month.

Today 64% of the global population – 156 countries – have agreed to participate in the plan, but it needs additional resources to secure and distribute vaccines.

I believe the U.S. should provide the moral leadership necessary to bring the plan to fruition.

How does the U.S. exiting COVAX affect the distribution of vaccines?

As the U.S. renounces COVAX, Europe is stepping up to lead the global response.

The EU reports that it has helped bring together 40 countries and raise 16 billion euros to finance research on tests, treatments and vaccines. The EU joined COVAX, contributing 400 million euros to ensure that the poor as well as the rich can secure safe vaccines.

However, France and Germany, though officially part of the global collaboration, have already made deals with pharmaceutical companies to secure vaccines for their populations and will not purchase them through the international effort.

I believe we can best control the spread of the pandemic if all countries collaborate. The U.S. and other countries that do not join COVAX will not be able to access the vaccines COVAX secures. Moreover, if these countries do not secure enough vaccine on their own to achieve herd immunity, they remain vulnerable to the virus. They should, instead, work together to control the virus’s spread around the world through COVAX. The Trump administration’s decision leaves us all at risk.

Whom should receive the vaccine first?

What about countries that can’t produce their own vaccines?

All of this said, the COVAX plan is not perfect.

Although COVAX claims to provide equitable access to vaccines, rich donor countries will likely get to vaccinate 20% of their populationsbefore the rest can vaccinatemore than 3%. And in a move to attract donors, COVAX has also let these countries pick which vaccines they want to invest in.

The plan is not fully transparent and, I believe it should require vaccines be made available at cost, include nongovernmental purchasers, and embody the WHO’s Solidarity Call to Action for equitable global access to COVID-19 health technologies: securing open access licenses that allow knowledge sharing and distribution within the generics sector.

Currently COVAX works within the traditional patent system – letting patent-holding companies charge whatever the market will bear. I believe this is a problem, in part, because about 80% of drug manufacturing is in generics and we cannot utilize this capacity if companies keep their patents. Patents are monopoly protections that prevent companies manufacturing generic drugs from competing with the company that holds the patent. They thereby constrain access and let companies increase prices.

It is better to reward companies for their contributions in other ways – perhaps on the basis of their global health impact. There should be no patents in a pandemic.

Nicole Hassoun does not work for, consult, own shares in or receive funding from any company or organization that would benefit from this article, and has disclosed no relevant affiliations beyond their academic appointment.