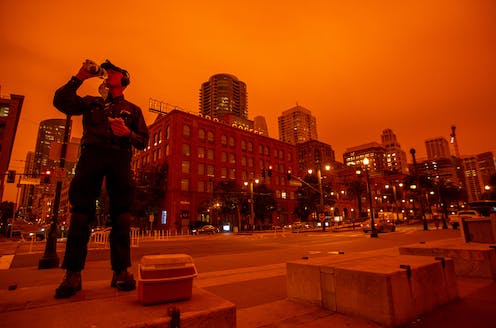 When you breathe in smoke from a wildfire, you’re probably inhaling more toxic chemicals than you realize.

Pollution from power plants and vehicles, pesticides, fertilizers and chemicals in waste can all make their way into trees and plants. When those trees and plants burn, chemicals are released along with health-harming particulate matter in the smoke, gas and ash.

Millions of people have been breathing that smoky air this year as the western U.S. experiences another extreme fire year. More than 4 million acres had burned in the West by Oct. 1, California had nearly doubled its previous record for acreage burned, and several weeks of wildfire risk were still ahead.

As an engineer and scientist who studies air pollution, I have been looking into how those chemicals compound the health effects of particulate matter from fires to create respiratory and cardiovascular problems, including asthma and cardiac arrest. To understand the risks, it helps to understand what chemicals people are breathing and how those chemicals get into smoke in the first place. Here are answers to four key questions.

How do chemicals get into wildfire smoke?

Several factors affect the toxicity of wildfire smoke. These include the type of fuel that is burning, the fire conditions, such as whether it is smoldering or burning, and the distance between the wildfire and the person breathing the smoke, as well as how long that person is exposed.

The chemicals involved also make a difference. The chemicals that end up in wildfire areas can come from fertilizers and pesticides from farms, waste and sewage from factories and communities, vehicle exhaust and many other sources. It’s well known that trees absorb large amounts of carbon dioxide from the air. But ground-level pollution can also be decomposed by microorganisms in the soil and taken up through the roots. And chemicals from pesticides or fertilizers can collect on leaves and plants, as can particulate matter from vehicles and factories.

When trees and plants burn, chemical reactions create and release many different pollutants that are harmful to human health. Among them: 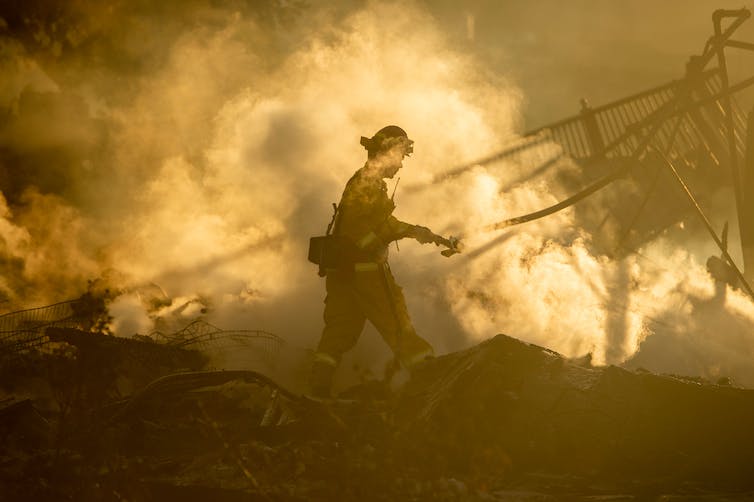 These pollutants are not only harmful for sensitive groups, such as older people, young children and people with chronic diseases; they are also a risk for firefighters who are exposed to the smoke day after day. When the materials in homes and other buildings burn, that adds more unhealthy pollutants to the mix.

What we do not yet know is the level of health effects from many of those chemicals and pollutants, such as benzene, polycyclic aromatic hydrocarbons and hydrogen cyanide, that are not regularly monitored the way ozone and PM2.5 are.

Air pollutants can travel hundreds of miles, and wildfire smoke can affect people even if it isn’t visible.

Wildfire smoke can also grow more toxic as it ages, creating a higher risk for people downwind. When smoke is in the air, its particles chemically react with other molecules through oxidation, creating more reactive compounds called free radicals that can damage human cells. Researchers in Europe found the toxicity doubled within about five hours and became as much as four times more potent over time.

The fine particulate matter in wildfire smoke is easily inhaled deep into the lungs and embedded in the tiny air sacs there called alveoli. It can cause inflammation and oxidative stress, leading to lung damage and worsening of various respiratory diseases, including asthma. 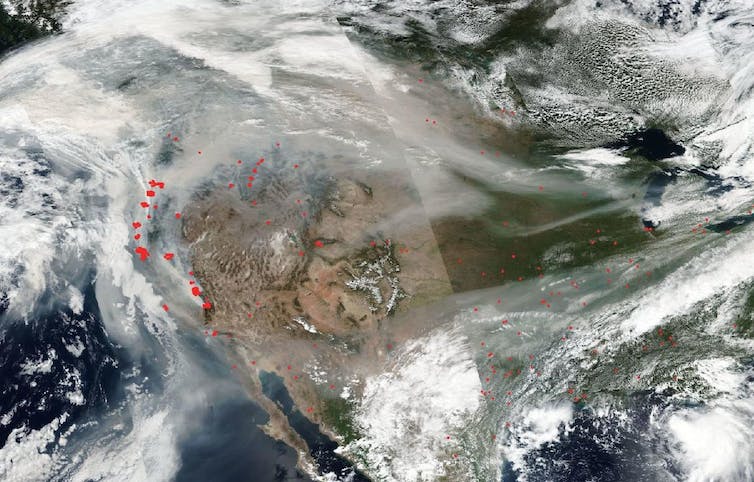 Smoke from California’s wildfires reached across the country in mid-September.NASA Worldview

Why does wildfire smoke worsen asthma?

When there are enough wildfire smoke particles in the air, human airways are prone to inflammation. That’s a problem for people with asthma.

In a recent study, my colleagues and I used chemical transport models, remote sensing and ground measurements to separate PM2.5 in wildfire smoke from PM2.5 from other sources. We found a substantially stronger association between smoke and asthma than previously reported. The toxicity of the smoke, including chemicals not often measured in ambient air, like benzene, formaldehyde and nitrogen cyanide, likely has something to do with it.

How can people in smoky areas stay safe?

There are several steps people can take to protect their health when the air is smoky.

(1) Pay attention to the local air quality index. Avoid spending too much time outdoors when there is a lot of smoke, and minimize strenuous activities outdoors.

(2) Keep indoor air clean. Close doors and windows when there is smoke, and use a free-standing indoor air filter that can remove particles. Do not increase indoor pollution by using candles and fireplaces, and avoid using vacuum cleaners that can stir up dust. Do not smoke.

(3) Follow your doctor’s advice. If you have asthma or other lung or cardiovascular diseases, make sure you have an emergency plan.

(4) Use an N-95 face mask. If there is a wildfire in your area or wildfire smoke, you should wear a mask when you go out to prevent harmful particles from entering your lungs.