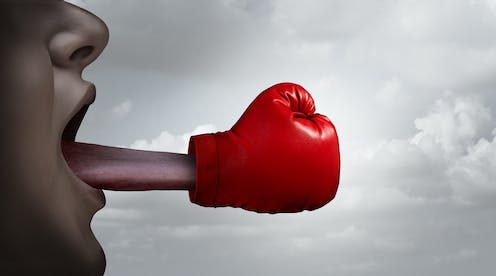 When a debate becomes just a fight.wildpixel/iStock/Getty Images Plus

In the wake of the chaotic first presidential debate, commentators have called for rule changes in hopes of making the remaining debates more useful for the public – namely, to give the moderator the power to silence candidates’ microphones.

After the nonpartisan Commission on Presidential Debates promised to add “additional structure” to “ensure a more orderly discussion of the issues,” President Donald Trump said he would defy any new rules.

By promising to dominate rather than debate, Trump made clear that he would continue his signature strategy for campaigning and governing: undermining democratic institutions.

That leaves one big question: Is a debate even possible?

As a professor of political communication and former college debate coach, I’ve spent 20 years teaching students how to learn from presidential debates. I teach them that functional political debates, like healthy democracies, require participants who respect the process and follow mutually agreed-upon rules. The rules are often mundane – what the time limits are, whether candidates can directly question each other and when rebuttals are allowed – but they make it possible for political opponents to engage one another, answer tough questions and give voters a way to evaluate contrasting arguments.

Trump broke the rules, abused the process and treated the notion of democratic debate with disdain. In so doing, he single-handedly created a Catch-22 in which the debate is either canceled or goes on as planned, but ceases to function as a debate. Neither option is good for democracy.

Debates have a purpose

Scholars lament that televised presidential debates don’t follow academic debate rules, but they can serve important functions for the public.

They demonstrate candidates’ ability to react under pressure, address a broad range of policy questions and connect with voters. The Pew Research Center reports that in many election cycles, large majorities of voters have said the debates help them choose whom to support.

What happened on Sept. 29 achieved none of that.

Trump launched a 90-minute blitz of outbursts, interruptions and attacks, which was roundly denounced across thepolitical spectrum. Moderator Chris Wallace of Fox News repeatedly inserted himself into the barrage of cross-talk, but was unsuccessful in his efforts to get Trump to abide by the rules.

Joe Biden expressed exasperation, using language unprecedented for a presidential debate, telling Trump to “shut up” and calling him a “clown.” Political scientist Jennifer Piscopo described the scene as one in which both candidates were “goading each other with performative masculinity.”

The Washington Post’s Jill Filipovic speculated that one reason the 2016 debates didn’t devolve into that level of chaos was that, as a woman, Hillary Clinton would have subjected herself to sexist criticisms if she had taken the bait.

Can this be fixed with a simple technological adjustment, like cutting speakers’ mics? If only.

The problem is that Trump didn’t just speak too long or out of turn. He adopted an anti-democratic stance and sabotaged the entire process. Muting his mic wouldn’t force Trump to participate in the debate in good faith. Moreover, it would give him the opportunity to claim that he’s being censored by what he considers a hostile media establishment.

The televised presidential debates were designed to ensure that American voters could evaluate presidential and vice presidential candidates in a live, unscripted context – one that exposed them to questions from journalists and citizens and enabled them to engage one another on the issues.

They were not designed with a saboteur in mind. The world may have two more chances to observe Trump and Biden together on a stage. But not in a democratic debate.

Karrin Vasby Anderson does not work for, consult, own shares in or receive funding from any company or organization that would benefit from this article, and has disclosed no relevant affiliations beyond their academic appointment.